Run To Honour The Holy Month of Shaban, Make Preparation For Berat

And may all peace and blessings be upon the Master of Shafa’at, the Imam of the Messengers, the Guide of the Evliya, the Helper of the Helpless, the Grandfather of Hasan and Huseyin, Sayyidina wa Mawlana Muhammad (asws), and upon his noble family and blessed companions, especially upon the Four Khulafa-e-Rashidin, Hz. Abu Bakr el-Siddiq, Hz. Umar el-Faruk, Hz. Osman el-Ghani, and Hz. Ali el-Murtaza, and all those who follow them until the Last Day.

O Believers! Our heads should be falling to sajdah in thanking our Lord, Allah (swt), for letting us to reach to such beautiful, such blessed, such tremendous days. We are right in the middle of the three holy months. And the believers, they must be longing for these holy days and nights. They must be making a difference in these holy days and nights. They must be excited in these holy days and nights. Because this is the way of those stars whose guidance we take to safety, the way of the Sahaba-e-Kiram. Hz. Anas bin Malik (ra) is describing to us the way of the Sahabi, saying: ‘When the Sahaba-e-Kiram saw the new moon of Shaban, they would busy themselves in reciting the Holy Quran. The Muslims would pay the zakat owed on their wealth, providing the means for the weak and the poor to strengthen themselves in preparation for the fasting of the month of Ramadan. The governors would summon the prisoners, to carry out the sentence on those convicted of major offences under Islamic law, and to set the rest free. Businessmen would set about paying their debts and collecting their dues. Then, when they saw the new moon of Ramadan, they would bathe themselves and devote themselves to worship.’

The Sahaba-e-Kiram were relating to us that Holy Prophet (asws) would honor this month by fasting. Hz. Anas is saying that someone asked Rasulallah (asws), ‘Which fasting is the best fasting after Ramadan?’ And Holy Prophet (asws) replied, ‘the fast of Shaban in honor of Ramadan. And Hz. Ayesha (ra) is saying that Shaban is the only month besides Ramadan that she ever saw Holy Prophet (asws) fast the whole month. And she asked him, ‘Ya Rasulallah, is Shaban your favorite month for fasting?’ And his reply was: ‘In this month Allah prescribes the list of the persons dying this year. Therefore, I like that my death comes when I am in a state of fasting.’

As believers, we should keep the way of our Holy Prophet (asws) and run to honor this month. And Holy Prophet (asws), knowing the weak condition of this Ummat, gave us a warning saying: ‘Shaban is a month between Rajab and Ramadan, much neglected by people. In it, the actions of all servants are raised to the Lord of the Worlds; I love that my actions are not presented except that I am fasting.’ So we should not be from those ones that are neglecting this Holy Month. We should make these days and nights different. We should be the ones that are running to please our Lord, to please our Prophet, to please their Friends in this month. And there is a night in this month, one of the most important nights of the whole year according to Islam. The night of Fifteenth Shaban, the Laylatul Barat, Nisfu Shaban, it is one of the most important nights that is written into time by Allah swt.

Holy Prophet (asws) described this Holy Night saying, ‘This is the night of the middle of Shaban, during which worldly actions and the deeds of mankind are carried to the heavens. In this night the number of servants that Allah frees from the Hellfire is as numerous as the number of hairs on the flocks of the tribe of Kalb.’ So that night is coming upon is. We should prepare ourselves. Because Allah swt is giving us these Holy Days and Nights as a chance to make up for all the wrong things that we have done over the whole year. Maybe we have been disobedient, definitely we have been disobedient and ignorant, and arrogant, throughout the year. But Allah swt, through His Infinite Mercy, is giving us these opportunities to fix it, to come closer to Him, in these Holy days and nights.

As our Sheykh, SahibulSaif is teaching us saying, ‘Allah swt, knowing how weak we are, knowing that we are going to leave everything and run away from His orders and run after our ego, He made some special days and some special nights for us to catch up with the things that we have left behind.’ In one Ayat He is saying to us, “O you who pass your limits in every wrong thing, going under the heavy burden of sins, don’t lose hope from Him, because He is the Most Forgiving One. You will find Him forgiving for you whatever you have done, as soon as you turn to Him.” This Ayat is a sign showing to us that in the holy days and holy nights that are coming, if we turn sincerely to our Lord and if we prepare ourselves for those days sincerely then we will be finding comfort and peace coming to our hearts. We will understand then that we have been forgiven. If a man is not forgiven then with the burden of the sins that he is carrying he cannot live in this world (in peace). Allah creates reasons to forgive us. 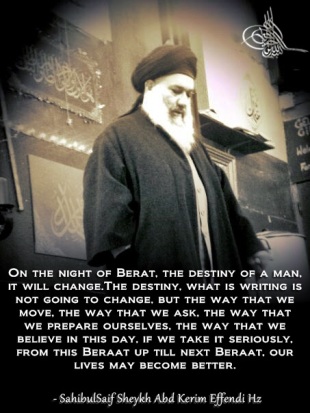 In one hadith Holy Prophet (asws) is saying to us, “When the days are approaching for the night of Berat (night of calculations, accounting night) spend that night in worshipping to your Lord and spend the day in fasting. Then you will find Allah swt forgiving you and forgiving your sins.’

Ya Ayyuhal Mu’minoon! O Believers! Run to make Tawbah to your Lord, Allah swt, in these Holy Days and Nights. Run to be forgiven. Beg for forgiveness. Remember your weakness before your Lord. Remember that we are servants. And the servant’s job is to beg from his Lord when he is in need of forgiveness. Our Sheykh is teaching us how to ask from our Lord, saying: You should say, `Ya Rabbi, I am sitting and asking, begging for your Rahmat. Definitely your Rahmat is bigger than anything that I am in.’ Allah swt becomes pleased with His servants when they come to ask him forgiveness.’ Do not be arrogant ones who are not asking their Lord for forgiveness. And not just to say astagfirullah by the tongue, no. But to sit down, with nobody around, and to sit and to make tafakkur and to think on those wrong things we have done, that zulm we have done to ourselves and others, on those sicknesses in our egos and in our hearts, and to remember those, and from our hearts to beg our Lord Allah swt to forgive us, to make tawbah and make intention to return to Him and to never return to sinning. It is that kind of tawbah that makes Allah swt happy with us.

And the Holy Prophet (asws) is saying, ‘Allah is happier when a servant of His repents to Him than a man who was on his camel in a waterless desert and the camel escaped from him with his food and water. When he has lost hope of finding it, he went to a tree and lay down under its shade. As he was there, the camel suddenly appeared in front of him. He took hold of its reins and becomes so happy that he says in excitement out of mistake: ‘O my Lord You are my servant and I am Your Lord’. He is so happy that he says these words by mistake.’

O Believers. In these holy days and nights, in these days leading up to the Night of Berat, we should sit, we should take accounting of ourselves, and we should turn back to our Lord. Berat is the night of accounting; We must put ourselves to accounting, let us check our records, let us clean it up, before it goes up to the heavens. As Hz. Umar (ra) is saying, ‘Judge yourself before you are judged.’ And insha’Allah, if we want a clean record, then we must stay in the association and in the pleasure of those ones that are signing our records before they are submitted. We must keep our Sheykh to be happy with us.

We are ending with the words of our Sheykh who is saying, ‘InshaAllah, Leylat-ul Berat is coming. We are intending again to be here and inshaAllah, this time we are intending as Holy Prophet (asws) is saying, “Try to sacrifice that night only for Allah. Try to worship more that night.” Now you know. You have almost two weeks to prepare yourselves for that night. Try to prepare. If you do then you will win. If you don’t then one day you may say, “Why didn’t I do?” Because every holy night and day is coming with their own blessings. Even if you reached all the other nights of Berat before, this time it’s coming with something new.

So inshaAllah this is what we must prepare for. That way we will always take the heavenly orders high and we will run after our Akhirat. Then the world will start running after us inshallah ar-Rahman. InshaAllah ar-Rahman, we will take these words, and we are asking our Lord to be counted from those ones who are passing with a clean Berat. Amin. 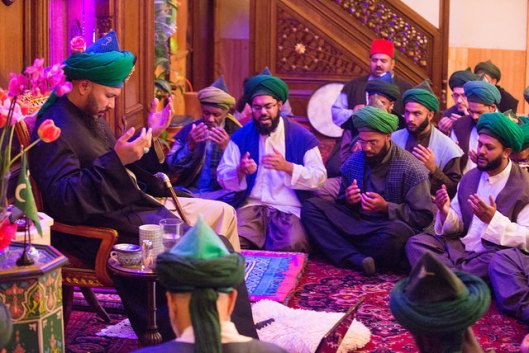 This entry was posted in Hoja Lokman Effendi (2015), Jummah Khutbah. Bookmark the permalink.