Why in the Quran is the story of Hz Musa (as) repeated so much?

Question: Why in the Quran is the story of Hz Musa (as) repeated so much? 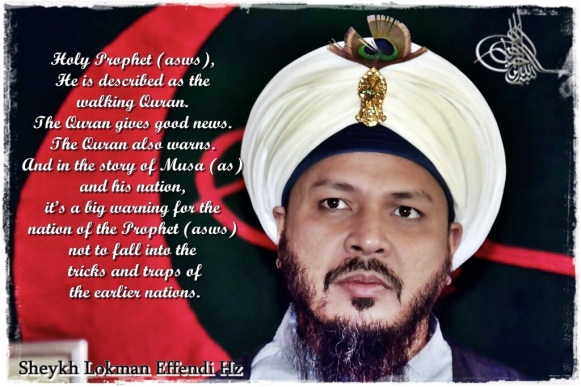 Not to fall into the tricks and the traps of the earlier nations, those ones who are following Hazreti Musa, those ones who are following Hazreti Isa especially. And these two warnings is one of the meaning that is inside of the Surahtul Fatiha, that we are reciting more than forty times a day. Aren’t we saying those ayats over and over again? And on top of it, Holy Prophet (asws) is saying, ‘in the ahir zaman, my nation they will follow those two earlier nations step by step. Even if they enter into the hole of an animal, my nation will enter into it too.’ It’s a huge warning to us. It is for us. It is for the believers, for us not to repeat those mistakes and those actions of the earlier nations. Because Prophet is already saying, most likely, we will.

So those believers, they are going to take the story of Hz Musa (as), and you are not going to sit and judge other nation, you are going to sit and judge yourself. Where is yourself in this? How many, they are opening the Book of Quran with proper edep, in these days? How many before they open the Book of Quran, they make sure that they are dress properly, Islamically, they are putting at least a turban on their head, fully covered, to burn some incense so that the Malaikats will come, and you are saying, BismillahirRahmanirRahim in a condition that is not pulling you to dunya and to be distracted. You are concentrating because right now, your Lord is speaking to you. These are the words of Allah, and they are speaking to you. You say, ‘Allah is telling me this. Allah is warning about this nation. Allah is warning me.’ Or are we just taking the book of Quran, amongst so many other books in our bookshelf, because it is cheaply printed, because subhanaAllah it is not bida’at to put: Printed by  Saudi Arabia in Saudi Arabia by Sultan, not Sultan, they don’t use that anyway, King so and so. Front page, in the Book of Allah but praising that wahabbi sheytan, first. And putting so many other things there. Because we lost the tradition.

There is an edep. Other nations they keep very strongly the traditions of writing the scriptures. Especially the bani Israel. Especially the Yahudis. Very strict. We used to have that. We used to have only Saints that’s writing the Quran, and it becomes Holy and we keep it high. We take it down to read but we keep it high. It is not a book that you can just buy in Barnes and Noble and somewhere, that Muslims today they have no connections to words of the Book of Allah. It’s just like any other book. In the Masjids, they put that Quran on the floor, stack up. In the masjids, they are lying back or sitting with their feet pointing towards the Qibla, putting the Quran on their lap right next to their, I’m speaking openly now, right next to their private parts and reading! It’s very good that people are reading Quran but that Quran, like the Quran itself is saying, ‘if you take it properly it will bring you to Paradise. If you mistreat it and  you use it wrongly, definitely it will drag you to Hellfire.’

The Quran is such a Holy Book. We are not trying to stop people from reading. So many people, they are in the bus, in the subway, they are reading the Quran. We don’t like that too much but we cannot stop people from doing it. They are reading, they are opening and reading, reading, reading, things are happening all around which is not fit into that. They finish, so many they put it in their back pocket. Or they put it here, or they put it there. You are carrying the Quran, it is the words of Allah. It is the words of Allah. Because of the respect of the Quran that Osman Gazi have, he was blessed, and the Ottoman empire that came from his lineage, to give shelter to the whole world because of his love and respect for the Quran, that  when he was put into a room and he asked what is that Book that is high and they said to him, ‘that is the Quran.’ He didn’t know how to read the Quran. He said, ‘that is the Quran? That is the word of Allah? That is the word of Allah?’  ‘Yes.’ The whole night he didn’t even sit down. He stood up with respect, for respect of the words of Allah, just like this. But when heaviness reached to him in that Fajr time, he sat in prayer and he had a dream. He woke up with the Azan calling and the story continues from there. And the Sheykh asked him, ‘tell me your dream.’ He told his dream. Because of the respect that he has for the Quran.

Muslims, Subhana’Allah, we have so many Qurans, we have so many people become hafiz. You are not being a hafiz of the Quran, you are not protecting the honour of the Quran. So many, they are destroying the Quran. They cannot be called hafiz then. So now, the Holy Prophet (asws), he’s the walking Quran. The Quran is what? Giving a good news and warning. We have a strong connection as an ummat to the earlier Prophet, especially to the Prophet of the Bani Israel, especially to Hazreti Musa (as). And in the lineage of the Prophet of Bani Israel definitely and especially to Hazreti Isa (as). That insyaAllah ar-Rahman, may he appear in our lifetime. The time is very short. It is not hundreds of years, it is very short. All the signs that are showing and Allah swt is making it very easy for us as an ummat of His beloved ones, to take actions from all the  actions of the nations of the earlier prophet. And if we don’t, and if we don’t, it’s going to be a very heavy burden on us, dunya and ahiret.

There are billions of Muslims now, two billions Muslims, but we have lost. Because no longer we are putting the life of the Prophet (asws) and his lifestyle into our life. And we have lost. And we are waiting for that one to come to save,  Sahibul Zaman, Muhammad Mahdi (as) to wake us up. Meanwhile, there are few people here and there, we are asking Allah to include us amongst those few people. SelamAleykum Warahmatullahi Wabarakatu.

This entry was posted in Hoja Lokman Effendi (2015). Bookmark the permalink.