How do I reach to Certainty Very Fast?

Question: How do I reach to Certainty Very Fast?

Those who are not busy with remembrance of Allah they are going to be busy with slander. It is a sign that you are not Ahle Zikir when all that you are busy with, all that you are making Zikir of, is the gossip of people. Because it is impossible for someone he is constantly to remember Allah that he is going to be even close to gossip or slander. If he sees something he is going to take it as a lesson to himself. We have nothing to do with gossip but of course we are so popular (Sheykh laughs), we are so famous, Astaghfirullah, that we run up to the top of a mountain to be away from everything, to be away from everyone, but still people are looking to us, finding us and being busy with us. Eh! We are thanking our Lord Allah (swt) for that, or this is also a lesson for us and to make us to stay on the Siratal Mustaqeem. May we never be tricked by our ego, by other people’s egos. May we always hold on strictly to the rope of our Sheykh.

We are asking our murids everyday about the Sohbet and about the Khutbah. Because people are just sitting and they are listening but it is not reaching into their, definitely, it is not reaching to their hearts. But you have to take something away. It has to hook on to your mind and your heart. It has to be something. If it makes sense to you, it’s going to give you energy, you are going to chew on it, you are going to remember, you are going to think on it. It’s going to start expanding through the week until the next time you have the Sohbet or the Khutbah. If that doesn’t make sense to you, if there is a question that definitely is going to hook and you are going to try to find out the answer to that through whole week or until you see your Sheykh.

So what does the Khutbah saying, what is the thing that it is important there that is speaking to you? (Sheykh asks the murid. A murid answers, ‘Continue your Sheykh’s mission’). Continue your Sheykh’s mission. And what is our Sheykh’s mission? And how did he reach to his mission? What did he do? He sacrificed. He sacrificed. It is not talk and it is not easy. The whole world is going to hate you. Your family will not understand you. Your loved ones will not understand you, definitely the whole world is going to look at you, you just want to remember Allah to be a good one, but the world is going to look at you either as a crazy person, and that is very positive, or as a sheytan. Either as a Mazub, a person who has lost his mind, or someone possessed by Sheytan. If you get anyone of these titles being in our way, know that you got the first Naqsh of our Sheykh, you got the first seal because all his life he is known as either a Mazub or a person, Astaghfirullah al Azeem wa atubu Ilaih, they are saying that he is sheytan (Sheykh smiles), they are saying we are gathering of sheytans, they are saying we are making a Zikir of sheytan. And I am not talking about kafirs calling us this. I am not talking about Trump, bump, dump talking about this. I am talking about Muslims. I am talking about Tariqat people. Because those ones they are not busy with Allah, they are busy with slander and gossip. Because if you are busy with Allah (swt) you are not going to be too busy with this.

We are keeping to ourselves. But we are reaching out to people who are responding. It is so easy for us to cut off all ties also and to say we are just being by ourselves, no. Our work, Sheykh Effendi’s work is saying to reach out, Sheykh Mewlana says to gather. So we are going. It doesn’t matter if one person or one thousand people they are going to respond to us, we will still go, we will still call because now our work is just to call. Oh! Just like Holy Prophet (asws). How many years in Mecca? Thirteen years in Mecca, thirteen years he is calling and calling and calling and calling. How many people came? Only a handful, correct? Thirteen years. Did he stop? They were slandering him, they were calling him all sorts of names, Oh, they also call him Ma’zub, that he is crazy. Oh, they also said he is possessed by sheytan. But did he stop ? Did he care? No he didn’t. He continued. He was tortured he was oppressed. His whole community they started to sacrifice for him. When they sacrificed for him, when they mean what they say when they say, ‘May my parents be sacrificed for you. May my children be sacrificed for you,’ when they sacrificed their ego and they are in complete submission and obedience to him (asws), then they had Yaqin, then they had certainty. With that certainty they are always moving up and up and up.

So if you understand, if we understand ourselves, if we are here saying that to know Allah you have to know yourselves, we are understanding ourselves then we have to know what is it in ourselves that is stopping us from having certainty to our Sheykh, fixing it every day, fixing it every time. As fast as you are fixing it, that much fast you are going to be in certainty. But let me tell you something, are we even certain of our ego? Have we witnessed our ego? Have we witnessed the sheytan that is holding our ego, guiding our ego? Have we witnessed and are we certain of this dunya, are we certain of our desires, have we reached Yaqin to our desires? If we haven’t, then we have some ways to go. If we understand that we have millions of desires and this is one desire that we have that is above everything else, that is most difficult to break but you are trying every day , every week, every month, every year, trying, praying, doing other things, trying to break it then you are on the way.

What is it about this dunya that is pulling you? You must be certain. If you say, ‘there is nothing in this dunya that is pulling me.’ Then you are still not certain, you still are in it. Because in this way, the sincerity it is very important. Don’t look, ‘Oh! I am only making one step. I am making two steps.’ You make one step sincerely then it is very easy for them to take ten steps to you. But you have to take that one sincere step and you have to work on it. It is very easy for them. It is very difficult for us maybe, very difficult, sometimes we cannot get rid of those things whole life time. Correct? We cannot, let’s be sincere. But if we are sincere and we are certain of our Sheykh that time it is very for them to take us, as long as we are working against to our ego. The minute we are giving into our ego and letting in, we are giving in to ego of other people, it’s not just your ego. When you are giving into these desires or this dunya and it comes with hundreds and thousands of tricks, in these days people are saying, ‘no, no, I have no ego.’ So easy they are saying that. Person who says, ‘he has no ego,’ that is showing the ego is up to Sidrat ul Muntaha. It’s like the person who is drowning and he says, ‘What? I am not thirsty.’ He is filled with water but he doesn’t know. 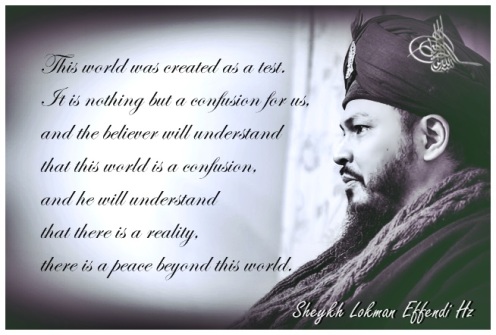 If we are working towards it and we are holding on to our Sheykh, that time what is necessary he is going to give. Because his certainty must reach us to something also. The certainty of the Holy Prophet (asws), all the Sahab i Kiram it is not just for them to go to Jannah. Was it? Did all 124,000 Sahab i Kiram, Companions, were they only there in obedience to Allah and His Prophet only for their own personal gain, personal benefit, personal spirituality, personal yakin? Were they doing that? What were they doing? It is not just the way it is the Mission. Every Sahab i Kiram, when they had certainty, they didn’t just want certainty and sit back to be in highest Jannah, no. The way that billions of Muslims they are. The religion is only for them to go to highest Jannah, but they are not understanding what is the Mission of the Prophet. You understand? When you have that certainty, the Sahab i Kiram, when they had that certainty they continued the Mission of the Prophet, they served him. It is the Mission of the Prophet (asws). It’s no longer even about them. How can it be? How can it be that they sacrificed everything then when they get faith and Iman and Taqwa they sit back and they just becoming selfish by themselves, no. Two doesn’t mix. It doesn’t, it cannot mix together.

So that time when they are in certainty and they continuing the Mission of their Prophet, the way that with certainty we are continuing the Mission of our Sheykh. Because that is then the purpose of our lives. Because Holy Prophet (asws), never he is asking Allah (swt) to raise him to higher stations or go to the highest Jannah. He is always asking Allah (swt) to save his ummat. So where are we in this now? Something to think about. This much is enough. Al Fateha.

This entry was posted in Questions and Answers, Sheykh Lokman Effendi (2016). Bookmark the permalink.