The Most Perfect Form Of Hazreti Insan 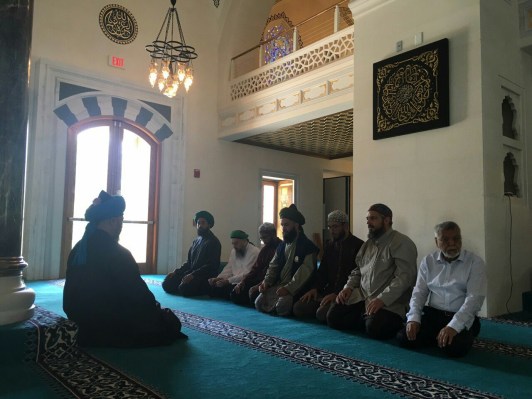 Have the most beautiful manners, not fake. Easy in these days everyone to have fake manners, ‘How are you?’ ‘Alhamdulillah, brother.’ Ahh, such sweetness coming from the mouth.

The manners, is the only thing that is going to be allowed in the Divine Presence. You think Allah swt is going to allow a partner in His presence? We come with what? Servanthood. We are going to approach with servanthood. Everyone wants to be a master. Everyone wants to sit on a throne. Doesn’t matter. What have we been created for? The names of the Holy Prophet (asws) was hundreds, thousands maybe. Of course. There is a name that is the greatest name of Allah, there is the greatest name of the Prophet (asws) too. There  is the Ismul Azam in that. But when he was asked what is your most favorite name?  He is saying, ‘Abdullah.’ Abdullah, to be a servant. That’s what we have been created to be. A servant in the service of the Sultan. What are you being then that time? You are a representative of the Sultan. That is what is called the Khilafat, that Allah swt has created us, mankind, in Ahsani Taqweem, in the most perfect form, to represent Him. Not the angels, not the other ones, not the animals, not anything in creation. Hazreti Insan. Hazreti Insan, that Allah swt has said, ‘We have created you in Ahsani Taqweem, in the most perfect form, but We have sent you to asfala safileen, the lowest of the low.’ This is here.

We are trying to make asfala safileen, this lowest of the low, that is a mere dot in our galaxy, mere dot in the untold universes, multiverses, whatever you are saying, Allah did not rest after six days.  Allah is continually creating. Allah’s magnificence is continually showing itself and manifesting for who? For who? For those that He has created to understand Him. He created the animals to understand Him, or did he create the angels to understand Him? Allah swt is saying, ‘I was a hidden treasure and I wanted to be known. So I created’, who? The light of Muhammad (asws).

Where are we coming from? From the light of sheytan?  It is in us. From the light of this dunya? It is in us. The light of our ego, the light of our desires, they are all in us. These are the four enemies of man that those who are saying, ‘we are trying to be believers,’ they are going to get rid of those veils, those false lights, to come closer to the light of Allah swt, to represent Him. This is what Tasawwuf is. To remove the seventy thousand veils between us and Allah swt.  This is what every Prophet came, all the descendants came. This is what the Holy Prophet (asws) came to give the full blooming of that rose of Islam and of Ihsan, that we can take this and we can continue until Judgement Day. So we have been created not for this asfala safileen. There are those who is saying, ‘we have been created for Jannat.’ Yes, Allah swt meant to put us in Jannat, Paradise. The word Paradise coming from Firdaus, our home, for those who are satisfied with Paradise. But for those who believe that we come from Allah and we are going to return to Allah swt, for them, the aim is not Paradise, it is Allah. Paradise that time it becomes a veil. Don’t say we are those ones. We have not even smell Paradise. We haven’t seen anything. If one light from Paradise comes, it will wipe up this whole world. It cannot take such beauty, such Holiness. Do you understand? One smell comes, we will die. We will give up our ghost, like they say. This is not a game, this is not a joke.

So what have we been created for? This is what believers, seekers, they are going to keep asking. Yes, we have been created for our Lord. How are you going to be created for your Lord? What are you going to do then for your Lord? What can we do? We are saying, we are servants to Allah, what is it that we are doing? Allah requires us to serve Him? No. Subhana wa ta’ala Jala Jalalahu, He is the One who is not in need of anything. And in reality, who is serving who? What can we give Allah? What can we give Allah that Allah needs? Ataghfirullah.  So this comes now back to La ilaha ilallah Muhammadur Rasulullah (asws).  Why does it come back to that? To love those whom Allah love, to leave those whom Allah leaves. This is at least something that we can do. This is the question that Musa Kalimullah he asked Allah swt on the Mountain of Tur.

Musa is saying, ‘I pray for You Ya Rabbi.’

Allah is saying, ‘the prayer it is for you Ya Musa. It is not for Me. It is a protection for you.’

‘I give zakat,’ meaning I take something out from my wealth that I earned lawfully and I give it to those who are in need. This is part of our religion.

‘It is protection for you and cleanliness for you,’ cleaning whatever that you have earned.

‘I go to the Hajj.’ Yes, the Prophets they went to the Hajj. Where Nuh (as), the flood came to this world and he was saved in that ship with seventy three of his followers, family members and other creatures, when they passed by the  Ka’aba, Mecca Mukaramah, the ship turned seven times around, making the Hajj, and going. It is an order that was given to the earlier Prophets and to some of the followers.

‘What can I do Ya Rabbi, that is only for You?’

He says, ‘Love whom I love and leave the ones that I leave.’

Haqq is clear and Batil is clear. Manners are clear and bad manners is also clear. Azazil had the knowledge of this world and the Paradises. He was not an angel, he was a jin. But when Allah swt says, ‘I have created this new creature. It’s new to you,’ in reality the mankind it is the oldest creature, it is just known to you. We, we are still discovering ourselves. And Allah swt said to all the angels and in reality to all of creation, to make sujud, sejda to Adam (as). What was in Adam (as)? It was us. It was all of us. It is our spirit that is there. What else is there? What is giving life to this spirit, to the spirit of 124000 Prophets and all the Evliyaullah and all their families and all their followers, believers and unbelievers? What is giving life to that? The light of the Holy Prophet (asws). That Allah says, ‘This I have created to fulfill that Maqam ul-Mahmud,’ – the Highest Station, the most Praised station, that sheytan from so much worship, so much ilm that he rose in his maqams from this world to the Paradises and he was teaching some of the angels, he started looking at that maqam and saying, ‘that is for me.’ Because it is the most praised station. And Allah says, ‘this is for Hazreti Insan, Hazreti Peygamber Effendi (asws).’ So what did sheytan do? When all of creation bowed down, making sujud, sejda to Adam (as), sheytan became sheytan at that time. Because he had so much ilm, and he says, ‘I make sujud only to you. Not to this one, made of clay. I am made of fire.’ Immediately bringing with him his own understanding, his own reasoning, his own intelligence.

Islam is based, Tasawwuf especially, once you start following a guide, as the Sahabi e-Kiram they accepted the Holy Prophet (asws) as a guide, and the ayat of Amana Rasul, he is saying, ‘Sameena wa ata’ana – we hear and we obey. Ghufrānaka Rabbanā Wa ‘Ilayka Al-Maşīr – forgive us and to You is our return.’

Sheytan, in Divine Presence, disobeyed his Lord because he has more knowledge. Allah swt didn’t know? But Allah swt made that order and Sheytan with his ilm, he lost. Because he did not have this ‘we hear and we obey, Sameena wa ata’ana.’ Like so many of us, all of us, we know, we said, ‘why I have to listen to that one? He’s a man like me. So many looking at Imams and Sheykhs, ‘why I have to listen to him? We don’t all follow the same book? Why I have to follow him? Why I have to sit down and listen? Why he is sitting on a chair, I’m sitting on the ground?’ You think those questions were not raised by the people following the Prophet? 124 000 Prophets, some listen, most they say, ‘why I have to listen to him? We know him. He’s just a man like you and me. He makes mistakes.’ Like they say of the Holy Prophet (asws), ‘He’s just a camel herder. He’s an orphan, and now he’s declaring something?’ Like so many people saying I’m declaring something. So the example and the practice of the ego, of the nafs, it continues. And it is the same. If we are not understanding our nafs, we will not understand sheytan. If you don’t understand sheytan, you don’t understand your nafs, you will not understand what this world is, you are not going to understand your hawa. That time you can know the whole world, you can have knowledge of the Paradises as well, but your ego one day is going to trick you. 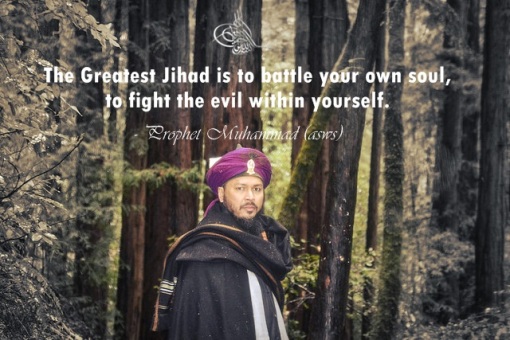 May Allah forgive us. We are here following our Sheykh. Following in the way of the tarikatul aliya of the Naksibendi  golden chain, following our Sheykh SahibulSaif Sheykh Abdul Kerim al Rabbani, taking from both wings, from the wings of the ahlil bayat Imam Ja’far sadiq (ra) and also from Hazreti Salman al-Farisi and Hazreti Abu Bakar al-Siddiq, following, not extremes, we are following the middle way. You have to have two wings to fly. If you have one wing, you are going to be circling around the tarmac, you are going to get dizzy but you think you are going somewhere. You are not.

May Allah save this ummat. May Allah wake us up. May Allah make us to understand. May Allah swt remove the confusion that is in our lives, in our faith and in the hereafter. May Allah forgive me and blesss you Wa minAllahu Taufiq Al-Fatiha

This entry was posted in Sheykh Lokman Effendi (2016). Bookmark the permalink.