Edep Is The Height Of Knowledge

And may all peace and blessings be upon the Prophet of Allah, the Messenger of Allah, the Beloved of Allah, Sayyidina Muhammad (AS), and upon his noble family and blessed companions, especially upon the Khulafa-e-Rashideen, Hz. Abu Bakr el-Siddiq, Hz. Umar el-Faruq, Hz. Osman el-Ghani, and Hz. Ali el-Murtaza, and all those who follow them until the Last Day.

O Believers! Welcome to you on this Day of Jummah in the Month of Shawwal. Soon we will enter into the month of Zul Qaida, and after that the month of Zul Hijj– believers should be aware and preparing themselves for the days that are coming.

An intelligent man takes lesson. As the Sheykhs are saying, “take lesson before you become a lesson.” Before everything that we do, we must say Auzubillahi minas-shaytan al-rajim. We must be asking refuge and protection in Allah (SWT) from sheytan. And sheytan, and the actions of sheytan, they represent a lesson for mankind. Sheytan was once named Azazeel. Sheytan was once worshipping Allah (SWT) non-stop. Sheytan was once working and serving Allah (SWT). He worshipped more than all of mankind combined. And through that worshipping, he rose all the way to the heavens and he even instructed the lower angels. But despite all of his worship, despite all of his knowledge, despite all of his work, he was kicked out from the Divine Presence- why? Because he did not have Edep, manners. Because he lacked good manners. And he showed bad manners to his Lord Allah SWT once, only one time, by saying “no” to Allah and His orders, and because of that bad manners that he showed to his Lord once, he was cast out forever from paradise.

O Believers! It is not enough to say that we believe. A man may believe his whole life, but if he lacks edep, he will fall into the footsteps of sheytan and be fooled at the last moment.

Edep (Manners), it is the essence of this religion. Edep, it is the reason that Holy Prophet (AS) was sent to mankind. He is saying (AS): The only reason I have been sent is to perfect good manners. (Bukhari). Edep makes a man to check himself before he acts. Edep makes a man to think before he acts. If a man becomes so fooled by hisego, by his nafs that he walks arrogantly on the earth to say, ‘well I am a believer, I don’t need to check myself,’ then he will fall into the trap of sheytan and be with him in Ahiret. Because Edep, in reality, it is knowledge of yourelf. Hz. Abdullah ibn Mubarak is saying: People have talked a lot about Edep, but the basic point of Edep is knowledge of your nafs.

Today, people think talking about edep is the lowest form of knowledge. They say, ugh, brother, ok, enough. Give us hadith. Give us Quran. Give us Tafsir. Give us fiqh. Give us ijtihad. Let’s talk about the big stuff. And yet, all of these knowledges will be dirtied and tainted if a man has not reached to edep. That is why in the old days, nobody was given this knowledge unless they had gone through the suluk of Tarikat. Because if religious knowledge is given to those without manners, if religious knowledge is given to those who don’t know their nafs, if religious knowledge is given to those who don’t know themselves and they are without edep,  they will use it for destruction. That is what is happening in the world today. ISIS- yes, the whole world is crying about terrorism. They should see who nurtured terrorism while it was in the stomach of the mother. They should see who gave it milk, who raised it, and who made it strong. Those who are condemning, especially the west, they will see their own reflection looking back at them. But terrorism shows that when men without any edep start gaining the knowledge of the Quran and the Sunnah, and they are given the power to act, they will use it for evil. 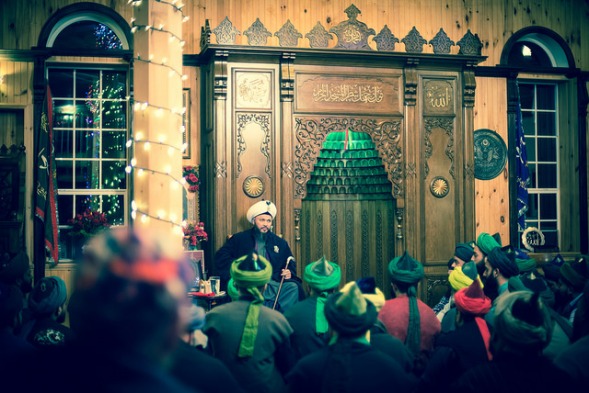 Edep is the key to accessing the heavenly knowledge. Without edep, knowledge only makes a man to become sheytan.

As one Evliya, a friend of Allah is saying, ‘You studied so much to be called a scholar- yet you never took time to study yourself. You run to enter into every masjid- yet you never tried to enter your own heart. Every day you set out to battle sheytan- yet you never fought a single day against your nafs. How is it that you are trying to grab what is in the heavens- when you never even took hold of what is inside yourself?’

So Edep, it is the point of all knowledges. It is the culmination of all knowledges. Today, everybody claims to know Allah- what is the proof? Good manners, it makes a man to reach the highest point of Taqwa. Because Taqwa is to always be aware of Allah (SWT). Edep is to reach to the station of Ihsan to say, My Lord is always seeing me. I must always be aware that my Lord is seeing me.

Just like Hz. Junaid Baghdadi (KS) had one murid whom he loved very much. And, as happens in the Dergah, the other murids got jealous. So one day he called every murid and gave them a small bird and said, go kill this bird in a place where nobody can see you and come back. They all came back with the slaughtered birds, except that one murid. The other murids started laughing at him saying, look at that one, he thinks he is so close the the Sheykh, but he doesn’t even know how to obey a basic order. Hz. Junaid Baghdadi looked at that one and said, ‘my son, why didn’t you obey my order? Why do you come back with the bird still alive?’ The murid said, ‘O My Sheykh- I looked everywhere, but I did not find any place where Allah did not see me. And so for that reason, I could not cut the bird.’ It was only then that the other murids understood why that murid was so beloved.

The Dergahs were the training grounds for Edep. And just like an ayat, in the Dergah they would write everywhere, Edep ya Hu, Edep ya Hu. That was the wird of the murid. They were running to do their duties for the sake of Allah (SWT). Not for show- but for Allah alone. Edep is the fruit of Ihsan, and Ihsan means to beautify. Edep beautifies everything it touches. Hz. Abdullah ibn Mubarak is saying: Edep in service is more precious than the service itself.

So that edep makes the service beautiful whether people see or don’t see. Because if a man acts for show, one day he is going to get tired and give up. But if a man does his responsibilities only for Allah SWT, it doesn’t matter if the world praises him or curses him- he finds satisfaction in his Lord. When a man develops this Edep within himself, he is going to have edep with others. It is impossible for a man to say, ‘I have edep within myself and he’s going to have the worse of edep with others.’ That is why Edep is the conduct of the Sultans. As Yunus Emre (KS) is saying, Edep is a Crown from the Light of Guidance. Wear that crown and be free from every curse. But because mankind has taken that crown off, we find that the whole world is in disaster.

Getting rid of that good manners has led to the complete breakdown of this world. One simple way to look at it- how we treat the elderly in our societies. In the old days, in the days when Islam was ruling, the olderly people were treated with the highest respect. They were consulted. People would honor them for their life experience and ask for their advice. The young ones would look up to the old ones, wishing to be like them one day. The older ones, they are their role models. As Seyh Efendi used to say, ‘the olderly people, they have seen the sun rise before me.’ But how are the elderly treated today? They are completely cast aside. They are stuffed into nursing homes where they are neglected and abused, medicated so that they are made numb and unable to speak. Society wants to forget that the elderly exist- because the new religion is to think you are going to be young forever. Even when you are old you look back to the days you are young and you wish never to die and to always go back to your young days. And so we find young people with no experience thinking that they know everything. This turning upside down of society, it has a consequence- and the consequence is this confusion that we see today. Holy Prophet (AS) said, He is not one of us who does not show mercy to our young ones and esteem (respect) to our elderly. (Tirmizi).

Ya Ayyuhal mu’minoon! Edep, by its very nature, edep,cannot be acquired by book knowledge. You cannot learn edep by reading books on edep. Edep must be learned by sitting with the people of edep. Real knowledge, it is not just to collect knowledge. It is not to read millions of hadith and memorize them and carry them like a donkey. Knowledge is to take just one Hadith, and apply it to your life, and live according to that.

The Sahaba-e-Kiram, they were not running to collect the Hadiths for the sake of learning Hadiths. They were running to gain the manners of the Holy Prophet (AS). And because they gained those manners, when they went east and west throughout the world, everyone fell in love with them. And through that love, they entered into Islam, and they also gained that Edep. That is why we see the foundation of Islamic societies, from Indonesia to Bosnia, it is founded on Edep. If we want our Sha’an, if we want our glory to come back, it must begin with regaining that Edep.

O Believers! That Edep is our safety dunya and Ahiret. We should sit in the association of the Friends of Allah, who are dressed in that Prophetic Manner. Because by being with them, we will reach out goal, insyaAllah ar-Rahman. And that goal is in the Hadith of Holy Prophet (AS) who said: The nearest of you to me on the Day of Judgment will be the one who is best in manners.

Ya Rabbi! Make us be close to the ones who have come close to your Prophet through those manners. Let us to also be one of the Ehli Edep. Amin.

This entry was posted in Jummah Khutbah, Sheykh Lokman Effendi (2017). Bookmark the permalink.